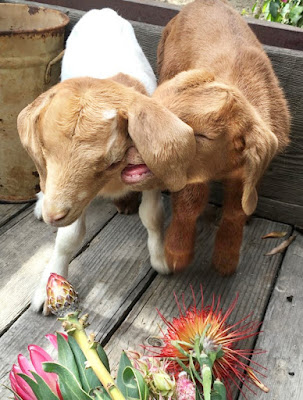 For the seventh year in a row, the California Legislature is honoring the state’s flower farmers and recognizing their contributions to the state’s economy and workforce by declaring June as California Grown Flowers Month. The resolution highlights California’s leading role in flower-farming and the economic impact it has on the floral industry. 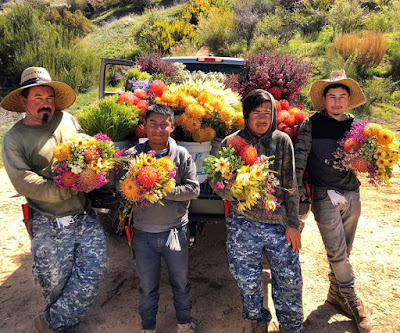 The industry has blossomed since its inception back in the late 1870s. Statewide flowers are grown across 701 million square feet, spanning the distance from San Diego through the Inland Empire to Carpinteria and north all the way to the Oregon border. California farmers produce three-quarters of the cut flowers in the United States, provide over a 100,000 of jobs and account for a total of $12.2 billion in economic activity every year. 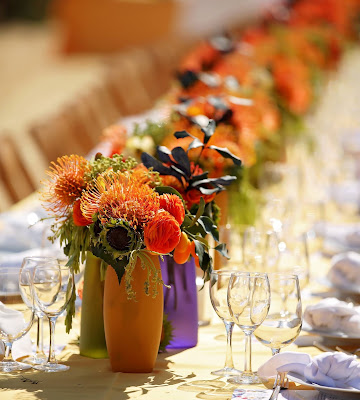 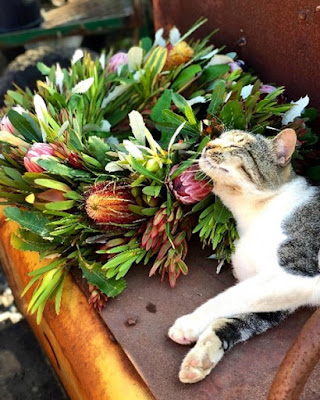 It’s Not Always About the Flowers 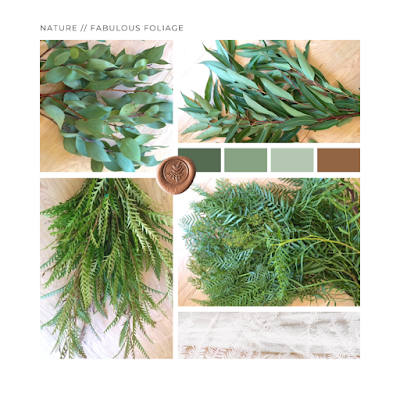 Step aside flowers. The most interesting designs do not always rely on beautiful blooms to grab our interests. Instead, it is the foliage that win the applause. We love the remarkable array of shapes and sizes that are found in nature, from long, thin, oval, round, lacey, feathery and serrated. These wonderful botanicals add volume, texture and height to decor. And when it comes to color, most foliage is green, simply because all photosynthetic plants rely on chlorophyll for energy. Green is considered a neutral color and can often be left out in planning a color scheme. There are many different shades of green - from light and dark hues, blue and silvery tones, as well as variegated varieties. Matching the right foliage to colorful flowers can have a subtle but very powerful impact. 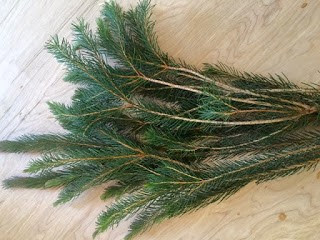 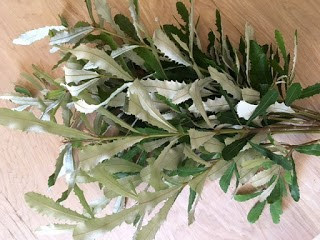 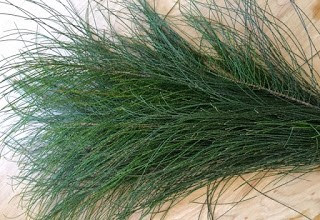 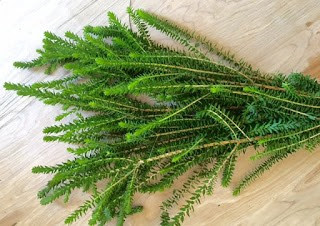 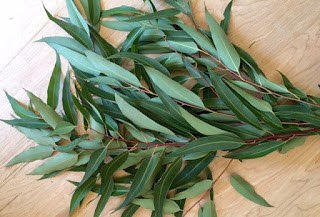 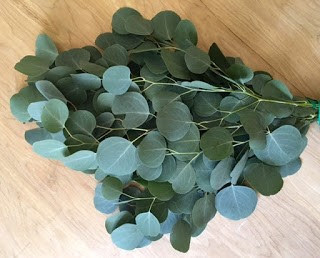 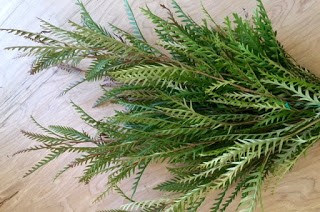 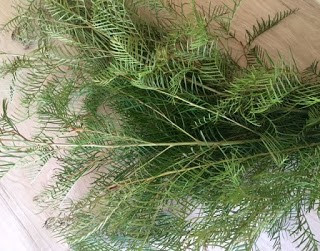 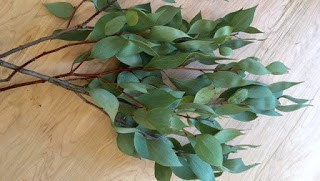 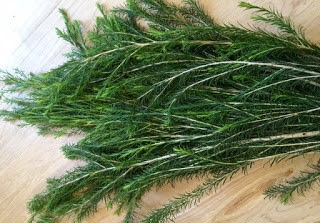 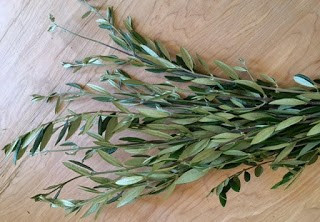 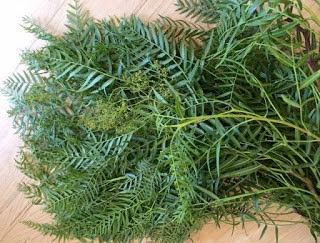 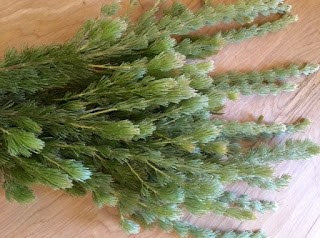 Wooly Bush
Posted by Diana Roy at 5:14 PM No comments: 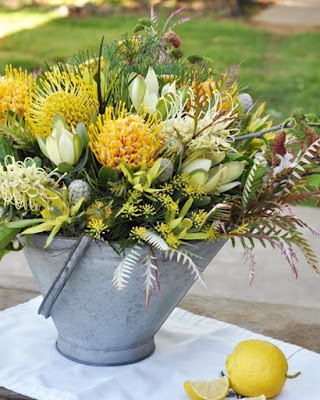 Yellow is upbeat and modern, shining with optimism and joy, the color of gold, sunshine and energy. Bright yellow is psychologically the happiest color in the spectrum. Yellow advances from surrounding colors and enlarges any space. It mimics a sun-filled space, creating feelings of liveliness and good cheer. 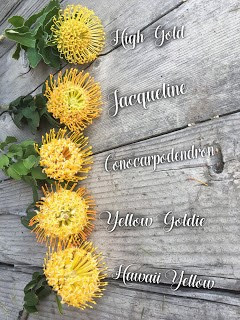 It's pincushion season here on the farm, and we're putting the spotlight on some of the beautiful new yellow varieties being harvested. To help you distinguish between the infamous High Gold and the newer cultivars, we put together this handy chart and some close-up shots to view below. 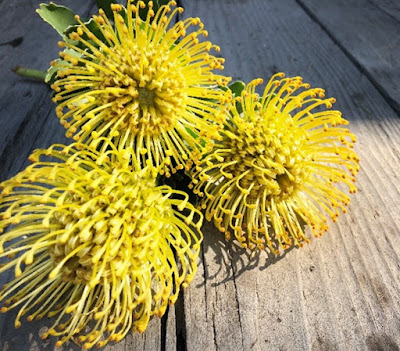 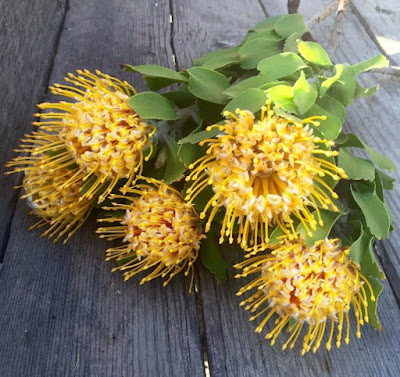 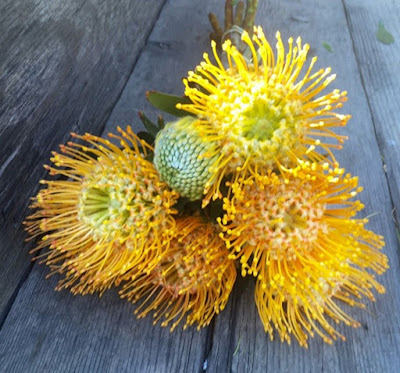 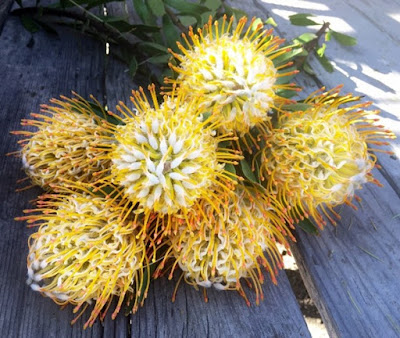 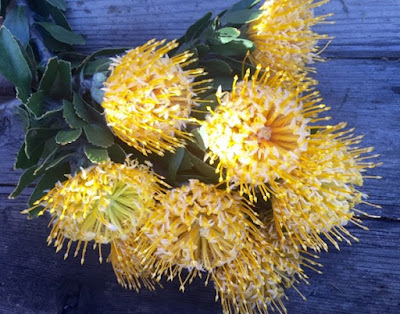 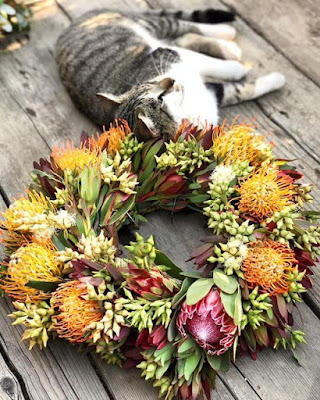 Yellow has historically been used to kindle joy and inspired positivity.
Posted by Diana Roy at 7:43 AM No comments: