In the Field: Protea cynaroides – Kings 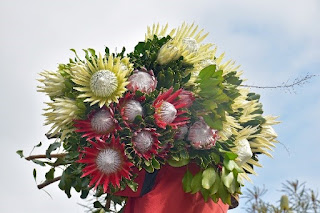 It’s safe to say we’ve been seeing an abundance of King Protea in bouquets and centerpieces lately. There’s been a little something for every ‘King Connoisseur’… bouquets featuring just a single stem all alone to lavish designs where they’re mixed with an array of awesome blossoms. And we figured if you’re as crazy about kings as we are, you’d want to know a few interesting facts about these chic flowers.

The artichoke-like appearance of the king’s flower-head lead to the name ‘cynaroides’, which means ‘like cynara’… the artichoke. The name does no justice to the beautiful blooms of this protea, which is the largest in the genus. There are over eighty varieties of kings and they're divided into groups according to their leaf type. The leathery leaves vary from large and rounded to small and narrow and their huge flowers can be wide open, almost like a 12” dinner plate or a narrow funnel shape. These flower heads consist of numerous small, tubular-shaped blooms or also called an inflorescence. Their color can range from greenish-white through soft silvery pink to deep red, with each variety having its own flowering time. 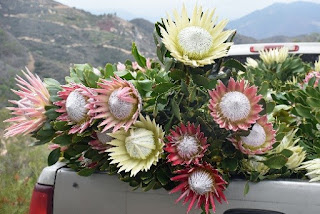 King protea are perennial plants that can survive many years in the wild. They also tolerate fires thanks to their thick underground stem filled with numerous dormant buds which starts to sprout shortly after a fire. Fires also assist with drying the cones and releasing seed, while the wind helps spread the seed and seasonal rain triggers germination. 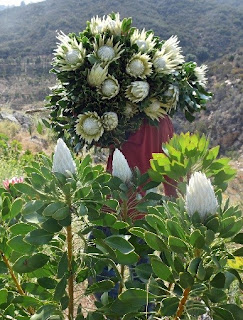 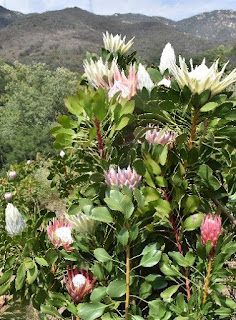 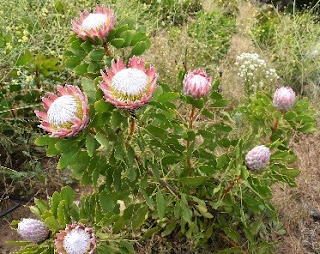 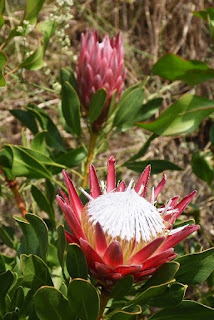 Kings provide a rich source of nectar which attracts birds and insects of all kinds who in return are responsible for pollinating these awesome plants. 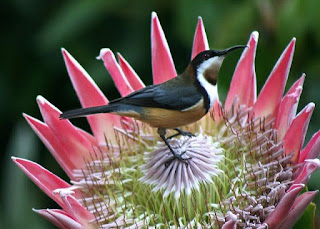 An Eastern Spinebill on a King Protea by Greg Miles
Posted by Diana Roy at 6:09 PM